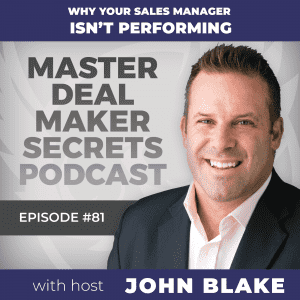 Hiring a sales manager is a big step for a business. If turnover is at a certain point, if they’ve got a sales team that is performing, this may seem like the next logical step. The thing is, it is a decision that should not be taken lightly. Making the step to employ a sales manager is a pretty big deal.

What happens next might be problematic, in fact, I’ve seen many businesses getting a sales manager and after maybe three months, six months, twelve months sales are simply not growing. Most importantly, it doesn’t seem to be any movement within the team and if anything, some division starts to become quite noticeable among them.

What is going on there? Where did it go wrong? Well, that is exactly what we are going to talk about in this episode.

Let me showcase a scenario so you understand the importance of this matter:

You’ve got a sales manager who is actually bringing business in, but he or she really only seems to be nurturing his or her own book of business, not really assisting the other guys in the team to continue to grow. All this person does is look at spreadsheets and pull the team up on being behind budget so what this person is really doing is looking at the deficit between the number that they’re shooting for and the number that they’re getting.

So, it is not a sales management systems problem, the issue is somewhere else. I’ve seen many companies make this huge mistake when they hire a sales manager because, even though they want a mentor, a captain, and a coach that’s going to nurture their team, what they end up getting is somebody who is quite self-focused and that is not really looking at the behaviours, the attitudes, and the culture within the team that underpin the numbers.

The irony is that you actually can’t do much at all about the number at the end of the month, but you can certainly do something else, something that is actually more helpful than just pushing your team towards a certain goal.

If you want to know what else is underneath this problem and what is your part in it, I encourage you to listen to this week’s episode and also to stay tuned because we’ll be returning to this topic next week.