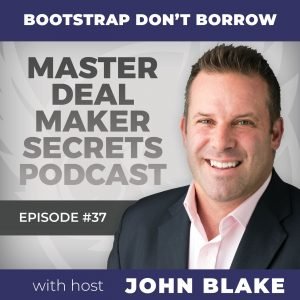 There are a number of serious problems associated with entrepreneurs and depression. This has become more and more prevalent in recent years. I’ve been looking and examining some of the dominoes that fall along that road: what is it that causes somebody to come into a place where they start to feel surrounded with very few choices.

I think that it’s worthwhile exploring that. When people want to begin a business, the first thing that they’ll do is need some seed capital. But if you don’t have enough money or you don’t have a history of being able to borrow money and tie it back, then the banks aren’t going to give you any money.

What would you then do? You might go looking for investors. Investors can come in many forms, even in the form of mom and dad.

That first success can be isolated. If you go into a different industry that you don’t know much about or perhaps you haven’t done as much due diligence and research and really set yourself up to take a goal straight off the bat, that second business might not go very well at all.

I think it’s the pressure of having to let the people down who are closest to you is what causes people to be depressed. And in extreme cases, and I’m starting to hear about this more and more: entrepreneurs are taking their own life.

And why is that? Because there’s science that they’ve borrowed money off people that had cited them, and they‘ve got to go back to those people, cap in hand and say, “I lost your money. I haven’t been able to do the things that I really wanted to do and I haven’t been successful in this business.”

Some people dread that conversation. Who wouldn’t? I was thinking about what’s the antidote to that. That is actually pretty simple and it’s about bootstrapping; it’s the philosophy that I have myself.

It’s the philosophy that I typically work with. I had clients that have come to me that have had an idea that they want us to launch, and they didn’t have the first idea about how to do it.

Probably the best example would be the PC client that I’ve worked with who is just going gray gaps while she’s just creating some incredible wins all over the place. When we first started, she had a payday business.

But she had this idea and this vision of what she wanted to create. Now we’ve grown that business to a point where she’s now doing four or five times as much. We bootstrapped that business; we’ve grown it and established a solid foundation at each level of growth.

If you know somebody who is an entrepreneur or if you are thinking of starting up your own business, before you borrow a whole bunch of money and set up really flash offices and spend a truckload of money on marketing, think about how you can grow that business organically.

The other cool thing about bootstrapping is that you get to market test your idea so you can get feedback before you actually go on down and throw a whole bunch of money into it. Before you go on tip a whole bunch of extra resources in, in the form of money or time into it, you can actually market test your minimal viable product before you go and invest a whole truckload of money.

I know that mental health is a massive thing. Hopefully, if there’s somebody who sees this, it’ll help them to sort of kick things off on the right foot.