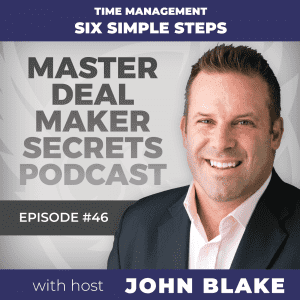 Back in the day, I had a mentor by the name of Chet Holmes, who sadly passed away a few years ago. He was always looking for ways to improve his time-management skills.

One day, he attended a time management course, where he was told to record everything that he did for three whole months… and that was just the first step of many.

Unfortunately, this gives you no time to spend on high-impact areas like talking to clients, going through offers with people, writing emails that you can broadcast to your leads. All that stuff suffers, which means your sales results are either stagnant or will begin to go backwards.

So, faced with the irony of this process, he developed his own system to master your time-management.

You want a system that works. You don’t want something that’s going to take an hour to do each day because you know you could be spending that hour on something much more productive. What’s classified as high-impact? If you’re in sales, it’s creating sales, more customers, and more revenue with existing customers.

You can increase sales without working any longer. Work the same hours, make more money. The first thing that we need to do is look at where all our time is going.

If you’ve got people that are coming to you throughout the day saying, “Hey, can I borrow you for a minute?”, Chet used to talk about giving them a notepad. They would list all their questions and they would nail them all in a half-hour. Something like that can make a huge difference – organizing time with people, rather than just giving them random access to you.

The other thing is to block out time. If you’ve got a bunch of telephone calls to make, then block out an hour. You’ll end up with voicemail about seven times out of ten, so you can make 20 calls, speak to six people, and get it over with within the hour.

Onto the important steps, step one is to touch it once. What does that mean? Don’t look at something, read it, put it aside and plan on coming back to it. If you’re going to touch it, smash it out and move onto the next thing.

Step two is to refine your lists. Rather than having 35 things on your to-do list, prioritize the six must-do’s. You should ask yourself, which six things will be the most important to tick-off today?

The third step is to plan when, and how much time you’re going to allocate to each task. Once you know what you have to get done in the morning, your subconscious mind will work on it overnight and make it much easier to take-on once you’re up.

Another concept is one that I learned from Brian Tracy, in his book called, “Eat that Frog”. The idea behind this book is that you should do the thing that you least want to do, first. The reason he mentions the frog, is that if the first thing he had to do at the start of the day was to eat a frog, then everything else would be pretty smooth-sailing after that. It would, by comparison, be pretty easy.

Step number four, plan the day then prioritize. Make sure that your six must-do’s are high-impact things. We’ve sort of touched on this already, but prioritizing is massive.

Similarly, the final step relates to these statistics – 70-80% of all filing is never referred to again. Ask yourself, will I survive if I throw this away? Will I be able to get this information somewhere else?

If so, then it is junk. I urge you to put these steps into practice. We live in a world that is full of distractions. We need a system.