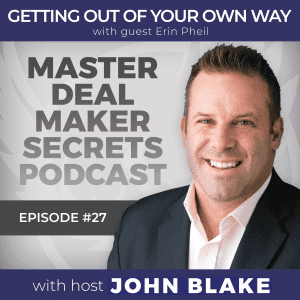 Recently, we had talked with Erin Pheil. She is a BS Psychology graduate, who blended her understanding of people and technology to run an award-winning nationally-ranked web agency for 16 years. Erin’s work and words have been featured in books, magazines, podcasts, webinars, news columns, and events.

She has given keynote talks and presentations on instincts and human behavior is Kolbe and DiSC-certified, and has trained with the leaders of a variety of personal and professional development programs over the last decade and a half, ranging from Sandler to strategic coach.

We look at some of the mindsets, tools, approaches, and tactics that our guests have used to put together either the biggest deals of their own career or their impact on someone else’s career.

With Erin’s introduction, she had shared with us the story of her fellow named Philip – an amazing salesperson but did not have the confidence in him, and was struggling to do the work for himself.

Erin and her team worked with him a couple of months and discovered that in that kind of circumstance, they need to figure out where that person is getting stuck. They found a lot of the root causes and old programming and beliefs that he had been holding onto.

What happened next was: within two months of graduating their program, he landed a project that was bigger than the entire sum of his revenue for the entire previous year.

His mindset went from being, “The only thing I see is fear and doubt. I can’t do this,” to feeling unstoppable.

Listen to podcast episode 27 for the complete program.

Erin noted that Philip still has the same skills, knowledge, and personality. Nothing about him has changed, but that sense inside is completely different. That sense changed his thoughts, emotions and actions as he goes about each workday.

But we also discussed that not everything can fall into place. Erin noticed a pattern in her prospective clients: they don’t want to believe, at first. She found out that no matter how the conversation goes or how much information she shared with them, none of that matters if the person has that belief that “This can’t work for me,” or “This is too good to be true.”

With this scenario, Erin said that she remembered listening to Dan Kennedy talking about infomercials. He said that they’ve got the best copywriters, television producers, and editors. They’ve got the best of everything. But out of every 10 infomercials that they pilot, 80% of them fail miserably, and only 20% of them see the light of day. There’s always a possibility that something’s not going to work.

When you form a belief and an expectation, it acts like a pair of glasses over your eyes. And the reticular activation system of your brain goes around looking for pieces of evidence or events that it can point to as evidence that it’s true. Same goes with how some people contradict and do not trust someone who wants to help them.

We also talked about opportunities for improving the mindset that people are not aware of. Erin noted that our behaviors, habits, and actions are based off what we think and how we feel. And so if we try to change our habits, but we don’t change what we’re thinking and how we’re feeling, our behaviors are never going to last.

So what can one do to address beliefs that potentially aren’t serving them? Erin suggested that people should be clear first on what it is they actually want to work on and what would really move the needle for them.

They’ll listen to recordings for three or four months and try to reprogram some of the old beliefs and belief structures that are getting in their way. She said that repetition is the cheapest form because it’s often free, but it’s also the least efficient. Nevertheless, with massive repetition, change is possible.

The discussion with Erin Pheil has taught us that mindset is very vital. Unless you get it right, the rest is compromised and you won’t be firing off all cylinders. And as you know, we need all cylinders firing to be able to compete in this world.